THE lucky winner of a £58million EuroMillions jackpot has been bombarded with sex offers from mystery women, pals claim. 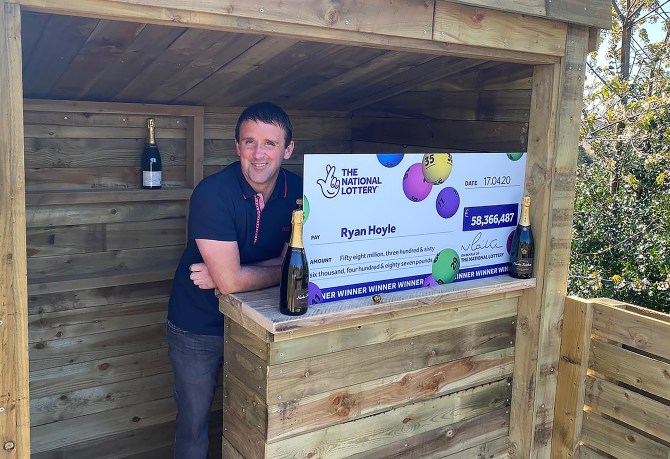 Single Ryan Hoyle, 38, has been inundated with messages and notes through the lettebox since scooping his eye-watering fortune.

Self-employed joiner Ryan hopes to take his 11-year-old daughter to Disney with his winnings.

But it seems others have their eyes on his new found fortune, the Daily Star reports.

A source revealed: “Ryan knew the letters asking for cash would start arriving pretty soon after news of his win broke.

“He’s a little more surprised at the offers of relationships from women and some are pretty graphic.

“But he’s a level-headed guy and he’s not going to have his head turned by ‘Sandra from Swindon’.”

And the tradesman revealed on Facebook he had made his first purchase with his newfound cash.

He wrote last week: "Just bought my friend his own little website...1st spend !!"

The business sells decals - a type of sticker - with slogans.

One of the stickers is based on the EuroMillions win, with the description reading: "Add your own numbers at the bottom and stick it to your wallet, fridge, laptop or anything….if Ryan can have this much luck then maybe we all can!"

Ryan usually takes his daughter to Spain each year, but when the travel restrictions are lifted he plans to take the 11-year-old to waterparks in Florida and Disneyland.

And he urged other Brits to look after themselves, writing on Facebook: "Please isolate and get this horrible virus away. It has taken so many lives and still continues.

"A big thank you to the NHS and any front line people facing these issues on a day to day basis..GOD AND FAITH BE WITH YOU ALL!"

Ryan said he plans to treat his family so they can "retire this week". 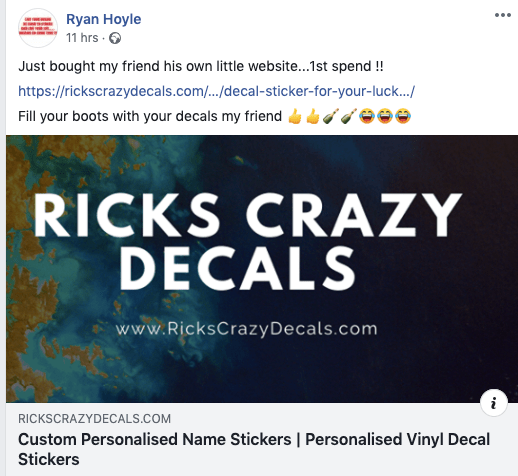 The website is also selling stickers inspired by Ryan's win

As a self-employed joiner of 15 years, Ryan’s been working on his brother’s house in his spare time, and plans to finish the job.

He added: “I’m nearly done so will see the job through. After that, who knows? Not sure I need the work at the moment!

“Right now I’m not focused on spending it on myself. I’m going to see the family right as well as my closest friends. Mum works at the local school as a cleaner and has been struggling with a sore hip for years, so it would be great to see her take early retirement straight away.

Right now I’m not focused on spending it on myself. I’m going to see the family right as well as my closest friends.

"She was down for a hip replacement but all operations are on hold at the moment due to the coronavirus crisis, so maybe I can help with that too.

"And this win means my dad can stop working at the factory by the end of the week too.

“It’s also been a tough time for one of my brothers who recently suffered a brain haemorrhage.

"He is a digger driver and was due back at work soon, so I can help him now and it means he’s not forced to go back to work. Basically Mum, Dad and my brother can all retire this week.”

'I COULDN'T BELIEVE MY EYES'

Ryan, from Rochdale, recounted how it slowly dawned on him that he had won the massive jackpot.

He said: “I always wake up early and was sat on the edge of my bed but couldn’t work out what I was looking at.

"The email linked to my account which looked like a lot of numbers and I thought it might be millions but I couldn’t believe what my eyes were seeing. I couldn’t make sense of it and really needed to talk to someone so I called Mum and Dad.

"It was 6am so they assumed that I had locked myself out of the flat somehow as it has happened before.

“I was shaking and really needed a second opinion so I jumped in the van and drove round to Mum and Dad’s house.

"I stuck to the government guidelines and kept a safe distance outside and passed the phone through the window for them to double-check for me.

"They even checked my numbers against another website, just to be sure. It was real – I had won £58 million!”

I'm worth more than him and my wife doesn't even know I exist!

i get excited when i win a tenner... i think i was rich in my previous life and now this life is making me earn my money - maybe one day i will be free to buy nice things :-) good luck to him - as for the women jeez how low can you go!!

single chap bound to happen, probably would still happen were he not single.

One day rodney.... i long for the day when i can stop worrying about debts and relax sleep and enjoy life ...look after family and disabled brother..Good luck enjoy it Ryan ..

The very reason this sigle bachelor went public in the first place.

Well know you will get gold diggers